Bespin Global MEA congratulates the UAE on its successful mission to Mars.

Congratulations to the UAE on this historical achievement!

The Hope Probe & the previous launch of the first Emirati Astronaut achievement by the UAE demonstrates Zayed’s vision in space exploration. Cloud Technologies such as AI, Big Data and HPC, are a key component of these advancements! 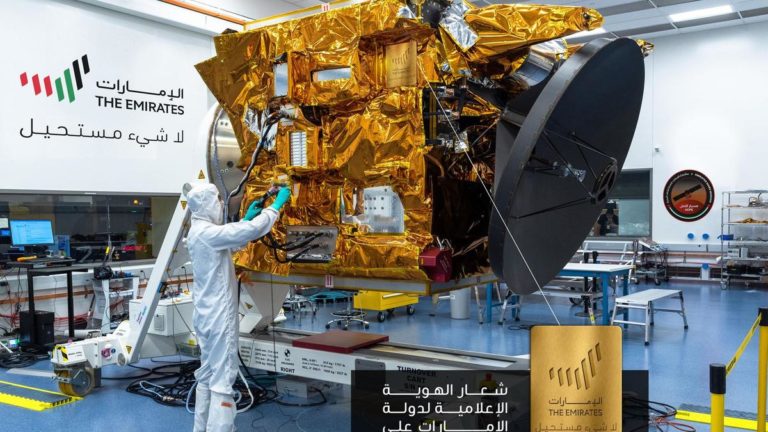 A Commentary from Mouteih Chaghlil, CEO of Bespin Global MEA.

On 10 April 2019, Katie Bouman announced the discovery of the first black hole. It was a global celebration and historical milestone for the space industry, yet the party was even bigger in the technology world. Katie and the team didn’t use any of the old methods, instead they developed a Machine learning Algorithm to instruct the machines on how to find it for them and that by itself is a massive achievement proofing the power of what cloud computing can enable us to achieve. The team used GCP (Google Cloud Platform) to run the machines.

“Those powerful VMs sped up our data analysis timeline from weeks to days and provided fast access to our colleagues from different parts of the world. In addition, using many powerful VMs allowed us to study a large parameter space and understand the effect of the algorithm on the final image.” – Chi-Kwan Chan, leader of the EHT Software and Data Compatibility Working Group and an assistant astronomer, University of Arizona.

Cloud computing is an important pillar in the UAE Space Sector development, it provides computing as a utility service. With the ability to store petabytes of data, on-demand computing resources and a rich eco-system of AI services, it enables the systematic evaluation of big data, understanding the collected information and how it relates to each other as well as the near real-time analysis of the collected data.

Microsoft announced its first Azure Cloud Computing region in the UAE in June 2019, which will enable the space industry to run at lower latencies (connection speed) from local data centers meeting regulatory requirements of local data storage. This will eliminate the previous need for massive investments in resources and enabling different teams to move quickly from concept to experimentation.

Cloud computing enabled new approaches that was economically unfeasible before, petabytes of space publicly open data are available today for free through the Registry of Open Data on AWS such as (CBERS, Sentinel-2, MODIS…). AWS Ground Station is a fully managed service that lets users control satellite communications & process data without having to build or operate any ground station infrastructure. AWS announced that the first Middle East Ground Station will be hosted in Bahrain as the regional control centre of a cloud satellite network, which can be used for weather forecasting, surface imaging, communications and video broadcasts.

About Bespin Global:
Bespin Global is one of the region’s leading cloud consultants and experts helping businesses adopt cloud technologies. It covers cloud strategy, migration, implementation, DevOps and Big Data. It is a Premier Consulting Partner of Amazon Web Services, An Azure MSP Expert, and a Premier Google Cloud Platform among others. It also has an in-house developed multi-cloud management platform called ‘OpsNow.’

Get in touch to learn more about Bespin Global.