The customer application was built on top of Microsoft SQL Server engine. Due to the continues business growth immerged the need to migrate the data to more cost-effective (licensing overhead), scalable and reliable solution. Another key requirement was ability to split read\write requests between Active & read-replica instances.

The core challenge was in the Microsoft SQL Server license used (standard edition) as it didn’t support provisioning of read replicas. Another important requirement was minimum downtime & migration cost bubble during the migration.

While discussing the solution, another added value was identified in which several optimization actions will take place during the migration (renaming tables & columns, optimizing indexes & table constraints).

Based on AWS recommendation, the company contacted Bespin, an AWS Premier Consulting and Managed Service Partner. the Bespin team worked with the customer to gather requirements, rearchitect, deploy, and test the entire solution, and manage the project.

The proposed solution was to migrate the database using AWS Data Migration Service (DMS) to initially load the data from MSSQL to two MySQL RDS with replicating the ongoing changes. This was managed by applying all remapping actions during the migration process by using separated tasks for each set of mapping actions.

Bespin used AWS Schema Conversion Tool (AWS SCT) that provides a project-based user interface to automatically convert customer’s existing database schema from one database engine to another. by using SCT for each database in the source MSSQL RDS

Bespin was able to provide the customer with the database migration assessment report which included the executive summary and a list of the recommended conversion actions the variated between simple to medium complexity to complex conversion actions.

DMN Global was responsible for applying the needed conversion actions in the target database with the support of Bespin.

In addition, the two MySQL RDS are encrypted by AWS Key Management Service (KMS) to create and manage keys to ensure security reliability. Finally, we used AWS CloudWatch to monitor the RDS and application performance. 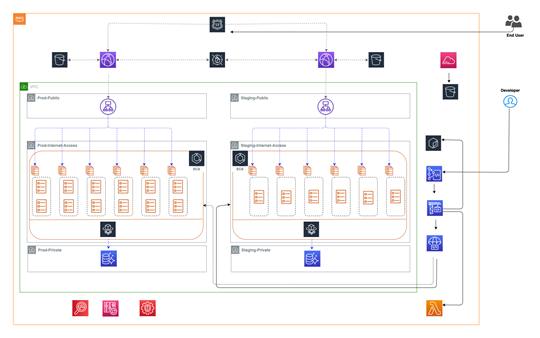 The primary key enhancement was providing replicas for the customer who was inapplicable due to the customer’s MSSQL standard license.

Bespin provided the best practice on customer structure by tunning and enhancing actions on databases level, including the configuration of parameter group, reviewing all application’s queries, the building required to index, and analyzing tables.

These previous actions ensured the decrease of databases load and saved a lot of cost for the customer with more reliable, stables, and efficient performance for both RDS.

“Once we implemented the new architecture,” states Ibrahim enthusiastically,” our costs dropped 50% overnight compared to the previous deployment. And the intangible benefits in terms of increased availability and reliability were terrific. We’re offering an over-the-top (OTT) consumer product. The new AWS architecture gives us the 24×7 availability our consumers demand.”